If you haven’t heard, foursquare announced yesterday the launch of what they’re calling “Local Updates”.

What are these and how can you use them?

Essentially, Local Updates will allow businesses to push messages to consumers who have either “liked” their business or frequent it. Updates can include things like specials, pictures of a new car (or a used car you just got in stock), it can include coupons, service specials, or whatever else you’d like your customers to see.

Your customers will be able to see these updates while in the same city as you. While certainly not as geo-targeted as it could be (like in the auto mall or within 10 miles of your dealership), being in the same city is a start.

In the past, the only way (or type) of message you could put out there for consumers on foursquare were “special offers” which required a check-in. While you can still make an offer to a customer, the ability to simply provide updates to consumers is another way of engaging them and staying top of mind.

Here’s an example of what an update would look like: 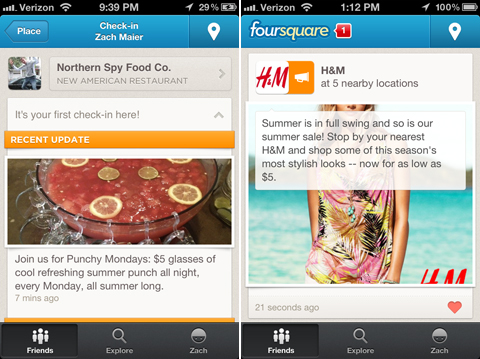 With nearly 1,000,000 business pages claimed and 10,000,000 users, foursquare is simply something you cannot afford to ignore. It’s fairly low-maintenance when set up and, since its free, the benefits vastly outweigh the possibility of lost business. Engaging your customers (or potential customers) is something that’s not only necessary but integral to increasing customer loyalty and retention.

The Local Updates feature will be rolled out to businesses that have claimed their page this week sometime so stay tuned.

Here is a brief video intro created by foursquare:

In my previous article, I covered the dangers of foursquare. While there are probably still many people who don’t use foursquare, this article’s topic is one that most social media users use: photos. We all take pictures and post them to Twitter, Facebook, Flickr, etc. Many people are posting them simply to share with close family and friends while many more (including your kids) are posting them to a larger social network that, many times, doesn’t include people they know.

First and foremost, if you’re posting pictures online, beware of the content of the photo for many reasons. There are so many perils involved including:

Wow, you may be saying. You may also be questioning the veracity of some of my claims. Forgetting the fact that most people don’t use privacy controls on social networks to their full capabilities, there’s one thing many people do not know.

Most people who are posting photos to social networks are using their cell phones to take those pictures and post them to their social networks. It’s easy, convenient, most cell phone cameras rival those of dedicated cameras, and many cell phones integrate with social media networks.

Another feature most cell phones have is GPS functionality including many non-smart phones.

Why is that important?

When you take a picture from a cell phone that has GPS capabilities, the GPS data for the location the picture was taken is encoded into the file for the picture itself. Yes, it’s there and easily accessible for those who know how.

What does that mean?

It means that not only are you sharing the content of the photos but also the location the photos were taken at. By sharing photos taken at your home, you are also giving out the EXACT LOCATION of your house down to the exact GPS coordinates. You know those photos of your cool stuff? Yeah, not only do criminals know WHAT you have, they know WHERE it is. Those photos of your children in your house? Yes, you just provided your children’s location as well. Belong to a dating site? That profile picture you uploaded could be contributing where you live along with all the other facts you posted about yourself.

Photos shared online create an even higher degree of danger than checking in to foursquare. The more public the social network, the greater the risk you take.

Luckily, most camera manufacturers have included the ability to turn off GPS services for the camera functionality. Learn how to turn this feature off. By turning this feature off, you remove GPS data from your pictures and make them a little safer to post.

You should still be judicious in what you are sharing but at least you’re not sharing your location anymore.

“Web Photos That Reveal Secrets, Like Where You Live” by Kate Murphy, NY Times [LINK]

“Get iPhone GPS and Geolocation Data” by Manish Patel [LINK]

“Facebook Users Beware: GPS Data In Photos Can Reveal Where You Live” by Armand G [LINK]