In the world of social media, no matter the platform, there are varying degrees of relationships. Everyone uses social media in different ways, some personal and some business. Most social media platforms were initially intended to help people connect and stay in touch with the people they care about in real life.

In the race for the most followers, friends, exposure or whatever your goal is in social media, it’s important to realize that amidst all the noise, you have real friends. Friends that enhance your life, contribute to your success, make you a better person, and truly care about you.

Don’t let an algorithm dictate who you share thoughts and moments with. Don’t let a Twitter feed become so noisy that you miss real conversations. Highs and lows, for better or for worse, be there for your real friends. Recognize them. Interact with them. Enrich your life and theirs.

Every day, it seems, the next best social media platform comes along. Everyone races to join and be included. We join so many social media networks that we aren’t really a part of any of them.

Social media isn’t simply about being there. It’s about connecting, experiencing, bonding, creating and nurturing relationships.

There are people trying to connect with you on a much deeper level than sharing news stories or inspirational quotes.

Be there for them. They’re waiting.

By Day 4 of NADA, I was totally wiped. Between walking the exhibit hall, networking, and night-time adventures, I didn’t have a lot of gas left.

Day 4 in the exhibit hall had me looking for some cool swag for my daughter. Not many booths had “kid” swag (lighty-blinky things, etc. A lot of footballs but not much else). In my treasure hunt, I managed to get a caricature done courtesy of Jack Behar and the VisuallyLinked booth, a DealerTrack 1/24 scale die-cast car, some autographs with Playmates at the Aspen Marketing booth and more. 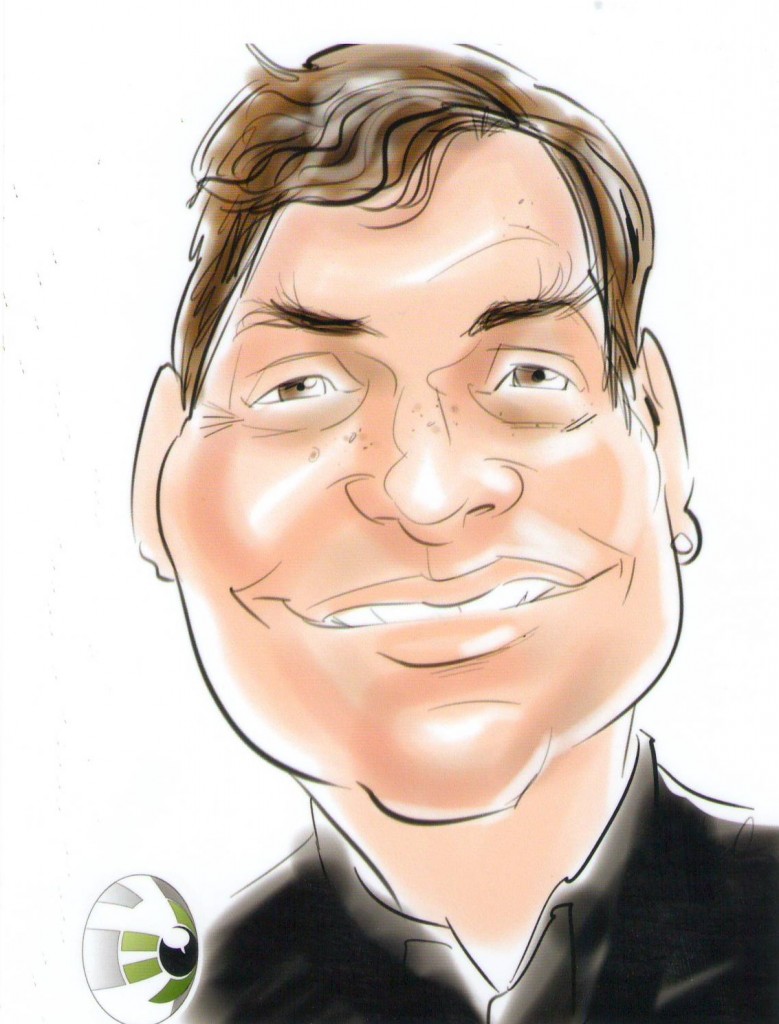 I managed to make it until I won this huge bear from the CUDL booth: 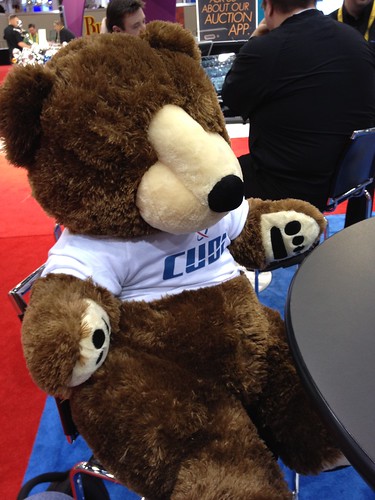 Walking around the exhibit hall with that huge bear got me a mixture of strange looks, smiles, queries as to how I was getting it home (I drove) and monetary offers but I was taking this home to my 5-year old daughter. (Man, was I a hero when I got home.) In the end, at about 2:30, I had to go back to my hotel room just to drop this off. I took a load off my feet and **BAM** I was out. I woke up right as former President George W. Bush was speaking. I was bummed to miss that.

I was invited to dinner with 3Birds Marketing that evening and we went to a delicious Thai restaurant. Afterwards, I needed to make a stop at the Caesars Palace Forum Shops. As the store closed its doors, they allowed someone in to shop privately. It happened to be Floyd Mayweather Jr.!! It was him and I, the store employees and his bodyguards (although I dont know why he needs bodyguards). Got to say “Hi” to him but I succeeded in restraining myself in asking for a picture with him.

After that, it was off to the Imperial Palace Karaoke Club. I typically visit at least once every time I’m in Vegas and it so happened that, earlier that day, Shaun Raines of DrivingSales tweeted out an impromptu industry karaoke party. Some of the 3Birds Marketing crew were there as were some ReachLocal people. It was a blast, as always. Rob Fontano KILLED the songs he sang. Dude even had a freakin’ harmonica in his pocket and played it during his songs. Are you kidding me?!?! I’ve NEVER seen someone whip out a harmonica during karaoke. Check it out:

Then, Shaun stepped up and did a duet with the DJ:

To summarize, this NADA was the best experience I’ve had at a conference and the first major industry event in the last couple of years in which I wasn’t working in some way or another. Between all the celebrities, events, parties, swag, gifts from heaven, networking, and sessions…. I sincerely felt charmed the whole time. Thank  you to NADA, God, the Lucky Charms leprechaun, and all those that made this convention so wonderful for me.

If you’d like to see some of the pictures I took (102 on display), you can view them HERE.

Oh, and remember that eBay Motors party I told you about in my Day Two Recap? I’ll leave you with some ice, ice, baby.

Sunday saw a lot of meetings, and running into (and trying to connect with) people. The exhibit hall was in full swing and jumping. The day was destined to be short because the Super Bowl started at 3:30pm here and all the parties were starting at 2:30pm.

We went to what, in my opinion, was the best Super Bowl party ever! eBay Motors set up the classiest, most intimate Super Bowl party I’ve ever been to. It was so classy celebrities were asking to come just so they could have a place to watch out of the general public. Not only that but all of them were super nice. They rented out the whole Seville Row … hell, I don’t even know what it was. It was a private area that is part of the LAX nightclub. Max capacity was only 125 people. Every place to sit was a freaking couch VIP area. Lots of room. Great wait service with an open bar and lots of great food. We even had home-made cupcakes made, and hand-delivered, by Robyn and Taryn of The Food Network’s Cupcake Wars TV show.

I met Roy “Big Country” Nelson from the UFC as well as Greg Hendrick who is the Director of Event Operations for the UFC. I also met Coolio .. yeah.. that one. We were living in Gangsta’s paradise. Roy Nelson joined us at our table for a while as did the girls from Cupcake Wars. Lots of great conversation (and pictures). Oh, and Coolio gave me his cell phone number and the club manager gave me a UFC t-shirt and an autographed Roy Nelson action figure. Yeah, that’s how I roll. Talk about making connections, how is a partnership with the UFC for digital marketing and social media sound? Money, baby. That was only one of many connections that I, and people I know, made.

eBay Motors delivered a first-class Super Bowl experience. I couldn’t have improved it in any way. In my, and other people’s, opinions, they pulled off both the best party of NADA (Vanilla Ice) and the best SuperBowl party of NADA.

After that party, we headed to the DealerTrack party at the XS nightclub. We got there and, swear to God, the line looked like people were at Disneyland waiting to ride Space Mountain. Serious.

That party was OFF THE HOOK. HUGE place, great layout and tons of people. You could party inside or by the pool. Nice. Well played, DealerTrack.

After DealerTrack, it was off to a nice dinner then bed. Brilliant day at NADA.

It was so brilliant, this is what I felt like at the end of the day:

That’s right. The Honey Badger doesn’t care. He takes what he wants.

This year, I’m going to be the Honey Badger.

Stay tuned for more tomorrow! Thanks for reading!

My goal for yesterday was to make the rounds in the exhibit hall. I started at one end with Robbie Campbell, Manager at Subaru of Puyallup (Harnish Auto Family) and Dan Moore of Smart Web Concepts. Took us 4 hours (yes, it’s that big!) to go down every aisle to do a complete walk-through of the exhibit hall.

I took a lot of pictures but, unfortunately, they are in my bag in Robbie’s room since I didn’t want to lug it around all night BUT, I promise to post them soon.

Caught up with a lot of friends – both in-real-life and virtual – and networked. Swag was awesome. VAuto had the best Id seen so far with this old school phone handset that plugs into your mobile phone. It’s so pimp. A lot of sweet rides. Some of the vendor booths were crazy! You’ll see. Be ready.

After the show, Rob and I headed to the Mandalay Bay for UFC 143 (which was awesome) and then to the eBay Motors party at the LAX nightclub at the Luxor.

Easily the best party of NADA. Seemed like everyone was there, including Vanilla Ice… YES! Ice Ice Baby was in the house and did a set! That’s some ghetto fun stuff right there!

Now that the party is jumping
With the bass kicked in, the Vegas are pumpin’
Quick to the point, to the point no faking
I’m cooking MC’s like a pound of bacon

Afterwards, they had pretty much the whole upstairs VIP section with bottle service.  We weren’t worried about the 300 people in line outside trying to get into the club. eBay WAS the Honey Badger last night!

Now to start day 3. More friends, fun and networking as today is the big game! Seems like there are 57 Super Bowl parties.

Here I am at the National Automobile Dealers Association, yesterday was the first day of the conference. Registration opened at 10am and sessions didn’t start until around noon. I got to connect with a lot of people I hadn’t seen in awhile. It seemed like yesterday was just kind of a “catching up” day for vendors without booths while others were getting booths ready for today.

Today is the “real” kick-off in that the exhibit hall opens and the mass scramble for dealers’ attention begins. There will be more iPads given away in the next few days than I think the Apple store stocks. I’m looking forward to visiting and plan to take a lot of pictures.

It’s a big weekend here. On top of the convention, there is a UFC fight tonight (UFC 143: Diaz vs. Condit) and the SuperBowl. I think there are 37 Super Bowl parties tomorrow.

As a prologue, pre-NADA events have been great. I got to catch up with the VinSolutions rockstars, hang out with Jeff Collins of Peters Chevrolet CJD, Dan Moore of SmartWebConcepts, Rob Fontano of 3BirdsMarketing. Ended up in a suite which, unbeknownst to me, eventually turned into a reception suite for Car-mercial (part of the DMSC) then transitioned to a fabulous dinner at Il Mulino courtesy of Scott Falcone (super smart and VERY passionate guy) and PrestoReviews, then on to the VinSolutions party afterwards.

Monday morning saw many in-real-life meetings with Twitter friends, industry friends and even some vendors I work with who I had never met, like Mike Fitzpatrick of DealerTrend. Ran into Grant Cardone. Caught Todd Smith (CEO of ActivEngage) session. He’s crazy brilliant. People were asking him questions well into the next session.

Eventually it was off to the Mandalay Bay for some non-conference, non-drinking, non… well, you get the point.. a break. Went to the weigh-ins for UFC 143 and then saw Joe Rogan doing stand-up. Met a TON of fighters (way cool) then called it an early night at 1am (yes, people, that’s an early night at ANY automotive convention but especially NADA).

Getting ready to begin Day 2 of NADA with coverage of the exhibit hall. It may, or may not, be live in the morning but it will be live eventually. Thanks for reading!