Facebook has always been experimenting with ways to generate revenue. It’s mostly been focused on businesses through Facebook Ads and Sponsored Stories but now it’s contemplating a revenue stream generated through users.

TechCrunch reported last night that Facebook has began testing a feature it calls “Highlight”. The basic functionality of this feature is that a user can pay a one-time fee to have a single post shared with more of their friends. Facebook’s algorithm is designed to identify and deliver what they believe is the content most interesting to any individual. According to the TechCrunch article, only about 12% of any given person’s friends see any given post. (People that utilize EdgeRank to maximize the potential that their posts are seen probably have a slightly higher average.) 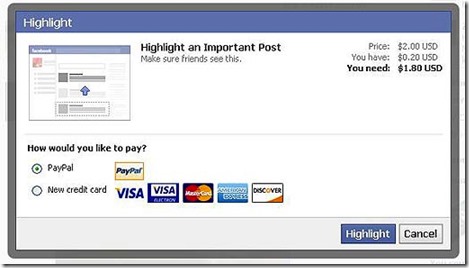 In my opinion, there are only a few legitimate uses for for this feature by an individual that wouldn’t annoy the heck out of their friends: “I’m moving”, “having a baby”, “someone died”, “help me raise money for a good cause” etc. would all be legitimate reasons, in my eyes. However, I don’t see too many people actually paying for increased exposure to other legitimate types of status updates even if it were available. (“Legitimate” in my eyes being a valid, non-spammy type of status update.)

More than likely, the people willing to pay for increased exposure for their posts would be people selling something.. whether that’s recruiting for a multi-level marketing “opportunity”, advertising their business or services, and, in the case of the automotive industry, delivering the many different ways of saying “come buy a car from me (or my dealership)”.

With many car dealers still stubbornly clinging to Facebook profiles versus Facebook pages, I think it’s just going to be way too tempting for them to pay the small fee to make sure more of their “friends” see their sale ad, highlighted vehicle, or “come buy a car” message. It will also be tempting for individual vendors to ply their wares on your Facebook newsfeed paying a couple of bucks for increased exposure to all the car dealerships they’ve friended.

The potential for people to newsfeed spam is way too high, in my opinion. I put up with an “occasional” plug from my Facebook friends. I mean, everyone needs to earn a living and rule #1 in sales is to make sure everyone you know is aware of what you sell. There’s nothing more frustrating than being a Toyota salesperson and having someone you know buy a Toyota from somewhere (or someone) else. That being said, I do have a line that a person can cross when the volume of those types of posts by them gets annoying to me.

I’ve never been a huge fan of Facebook choosing who they think I want to see posts from. I would personally like to be able to control that option but, for the most part, it accomplishes its goal. I also think I’m probably in the group of people that actually tells Facebook who and what I want to see by hiding people, creating lists, knowing (and using) my privacy settings, etc. as the more you do this, the more accurate Facebook’s algorithm can be in delivering relevant content. It’s unclear whether “Highlight” would circumvent these settings (ie. delivering messages from people I’ve hidden or normally wouldn’t see status updates from just because they’ve paid for that increased exposure).

Bottom line is that if your newsfeed becomes littered with individual advertising-type posts rather than being filled with relevant content from people you want to interact with, people will either start hiding or unfriending more people or they’ll use Facebook less.

According to TechCrunch, the feature is currently being tested in New Zealand.

Social media is all about engagement. The option to “friend” someone or “like” a business’ page exists to enhance the user’s experience and present to them only what they have chosen to see and engage with. If you choose not to engage with someone, you simply don’t accept their friend request. YOU choose which business’ Facebook page you are interested in having information delivered to you.

Imagine if Facebook were completely open. “Friends” didn’t exist. You saw every status update from every person on Facebook and every business. Facebook would cease to exist except maybe as a search engine. There would be too much noise. Facebook even recognizes this by filtering status updates for you and providing you with the option to create lists of people so that you can not only tailor who sees any particular piece of content but so you can easily filter out status updates and content into subgroups of your friends.

Then came Facebook groups. Initially, I thought this was a splendid idea. The ability to create an open or private group of individuals who share like interests and who can interact with each other without having to “friend” any group member. It offered a convenient way of sharing via a group Facebook e-mail address and, at the time, it was one of the only noise-reduction alternatives on Facebook.

Facebook groups has now become a convenient way to spam people in your social network against their permission. The ability to add people to groups without their consent has become not only a nuisance but, I believe, has actually decreased the value and allure of groups. I cringe whenever people add me to a Facebook group because 1) it irritates me that people can be presumptuous enough to choose what I’m interested in seeing and 2) because Facebook in their infinite wisdom chose to make the default notifications via e-mail on.

I belong to several Facebook groups. The groups I belong to are through my choice and consist of people and content I am interested in. I can’t belong to every group in existence, nor do I want to. Imagine if businesses could choose whether you liked their page or not. There would be many businesses who would just add everyone on Facebook and leave it up to each person to unlike it.

To compound matters, there are some people who will not only add me to a group, but after I LEAVE the group, will RE-ADD me.

It’s presumptuous and arrogant to take it upon yourself to decide for others where their interests lie. By doing this, you make yourself no different than the person who decided everyone you know could benefit from Viagra.

… and there’s a word for people who do that: spammer.