This isn’t a long blog, but it’s important.

I just ran across a news article (labeled under the category blog** full article below unedited) in Automotive News, that disturbed me.

The article was about how vehicle walkarounds are dead and useless. But that isn’t why it disturbs me.

The “News Editor that oversees Automotive News’ coverage of auto retailing,” Jim Treese, has just published an article that many would agree that HE needs an editor.

Specifically, he wrote an article about vehicle walkarounds being dead because… technology.

Yup, we have enough technology available so that salespeople should no longer expected to know the vehicles they sell and that there is no way they could possibly do so….

“It is unrealistic to expect a Toyota saleswoman to know the ins and outs of every Prius nameplate as well as every feature and option package on every edition of the Tundra.”

“That goes double for used cars. It is unreasonable to expect that Toyota saleswoman to know what’s included on the winter package of the 2012 BMW 3 series that the dealership took in on trade for an Avalon.”

Not once did the Jim Treese use the world “salesman” in the entire article, he just alternated between “saleswoman” (when it was negative) and “salespeople” (when it was neutral).

And that’s the problem.

Apparently, this old guy (if he can say “women” can’t know things, I can say that the “old guy” doesn’t) doesn’t know shit about the current state of the industry, doesn’t keep up with politics and certainly doesn’t express equality between men and women in the automotive industry.

On top of all of that, he may be violating The Federal Trade Commission’s rules regarding endorsements… specifically 16 FPR Part 255 which says that any endorsement must be disclosed.

I don’t know whether Automotive News has a connection with the company mentioned in the article, nor do I know whether the author does, but it sure is suspicious that only ONE technology company is named in this article that discusses why salespeople… cough… saleswomen… could never be expected to know either the product that they primarily represent nor the competing products that might be sold as used on dealership lots.

Screw training. Screw knowledge. Screw being able to discuss with customers the features and benefits of a vehicle…. Without a tablet or computer to help them, of course. But, it appears, he’s only talking about the “saleswomen” in the industry.

Not once does the word “salesman” appear in the article. Only “saleswoman” and “salespeople.” I guess it’s only women that can’t know details. Go figure as women are some of the most successful salespeople at any dealership. I guess they don’t know shit. It’s only because they are pretty, right Jim?

Perhaps James B. Treese needs someone to edit HIS articles. Probably a woman. But what do I know. He just pissed off all of the female automotive salespeople in existence. Not that Automotive News cares.

This is my editorial of your editorial.

And my opinion is that, as a representative of Automotive News, you have represented yourself as a misogynist.

Truth is in the words. Have a nice day, James B. Treese. Unless there are women around that happen to sell cars. Then you might want to lay low. 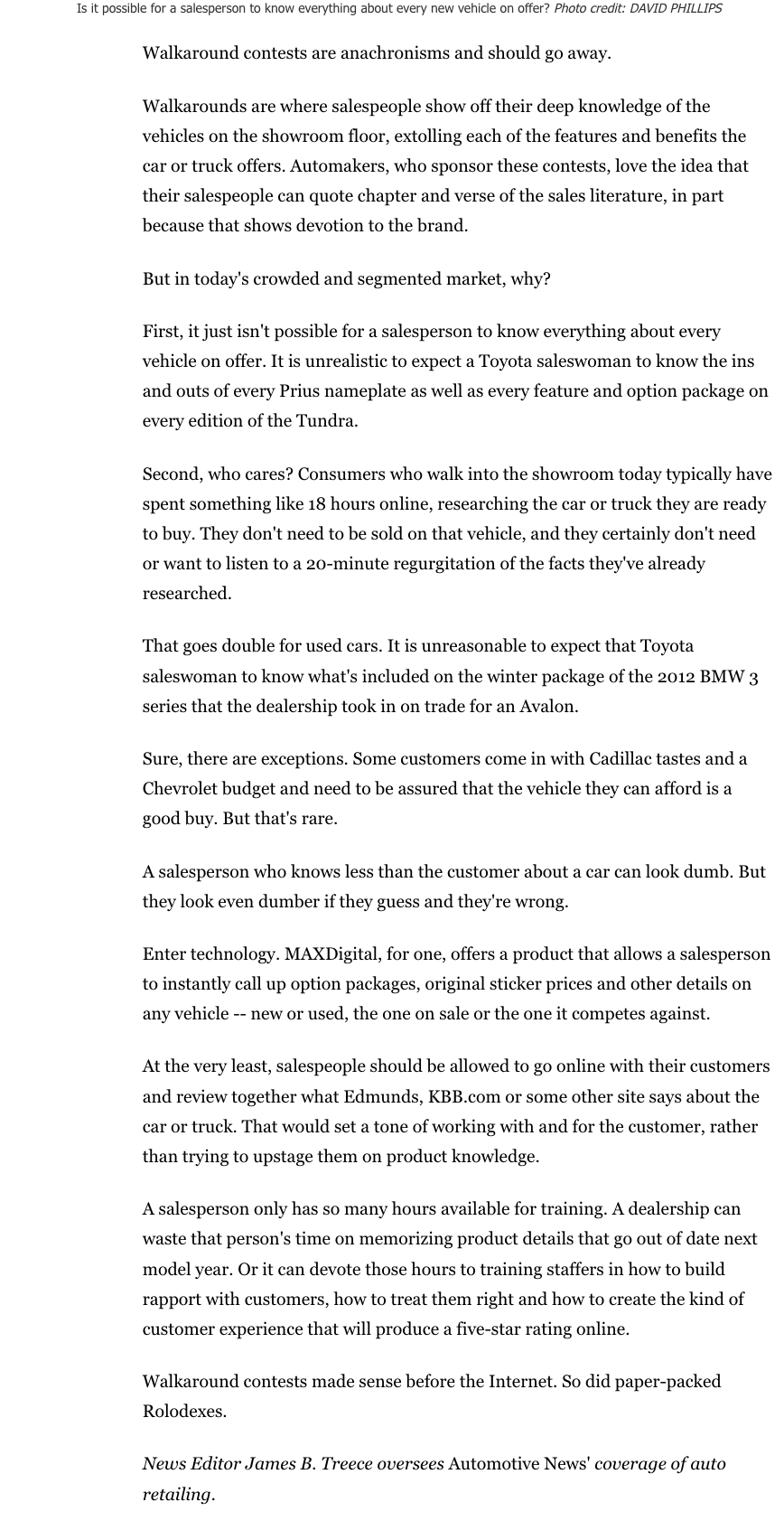 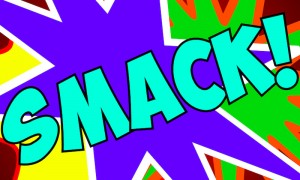 There is little doubt in anyone’s mind that the millions of recalls are going to increase the demand for technicians while straining existing franchise dealer’s service departments. Manufacturers are desperately trying to convince dealers to take on expensive expansion projects in their service departments in an effort to avoid losing service business to independents. To this point, according to an article in Automotive News, FCA US announced that it will be launching on online analyzer that will allow dealers to calculate the potential revenue increases of additional service capacity and technicians. Dealers will be able to play with variables such as number of bays, technicians as well as toggle shift lengths to see whether the expenses involved will be fruitful. Of course, with the massive amount of available recall work in and of itself, my guess is that the calculator is pretty much going to show numbers in the  black in most instances. The one piece of this article that really got my attention wasn’t the fact that a manufacturer is trying to get its dealers to expand their fixed ops capacity… no, it was this:

“Now, almost two-thirds of customers who buy new vehicles from FCA US dealerships are no longer visiting the dealerships for service one year after purchase.”

Sure, it makes sense that with almost 10 million recalled vehicles since 2014, FCA US is concerned about wait times for consumers to get their warranty work completed. The more completed recall work, the less liability for the automaker and a chance at retaining some brand loyalty.

FCA US has made some great strides and breakthrough initiatives in our industry as relates to employee retention by offering free college tuitions to all FCA US employees and dealership employees. They recognized that employee turnover in dealerships is unacceptable and hurts customer loyalty and stepped up to the plate to help dealers retain more employees by offering this one-of-a-kind benefit.

Perhaps FCA US should now shift it’s focus to what I see as a huge problem right now – the fact that, by their own numbers, their dealers only have a 33 percent customer retention rate average in service. It would only be logical to assume that the retention rate naturally decreases as more time passes. Wouldn’t it be easier to try and retain the 66% of the customers they are losing within a year of a new vehicle purchase before asking dealers to spend millions to expand service operations?

So now the dilemma, do you focus on retaining the water in the dyke frantically placing fingers in the holes just to see new ones appear? Or do you build a larger dyke?

I would suggest that perhaps increasing the size of the dyke would only create more holes in the long run. There may be more recall work but if dealers expand the sizes of their service departments, have a great run of service revenue for 3-4 years taking care of these 10 million vehicles only to find empty bays once everything settles down, that might hurt financially.

Just as FCA US saw a problem in employee retention and took initiative to fix it, perhaps they should now shift their gaze on what I see as a huge problem in customer retention in service. I’m pretty sure that if they don’t they will eventually run out of fingers and be forced to watch as all of the water leaves the dyke.