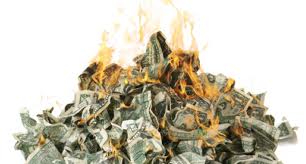 It’s the last few days of the month and the store is either below the number of sales they should have or they’re close to hitting a unit goal for some stair-step money. The sales manager is pushing everyone. He’s pushing the salespeople to not let any customers walk without not only a turn but also talking to a manager. He’s holding meetings to review all the deals that weren’t made during the month frantically trying to see if any can be revived. He’s listening to phone calls on their call recording service to hear if there were any phone calls that were mishandled and could be deals. He’s combing through the Internet leads to see if there were any deals that they were close on but didn’t make. Every minute of those last days matter. As stress and frustration (mixed with just a little sweat) mount, he’s fielding calls from his GM, possibly his owner and definitely his OEM rep who are continuously inquiring where the numbers are and pushing him to reach his goal, increase sales, and reduce the heat sheet. While the sales manager continues to down Red Bulls and triple-shot lattes, he’s making salespeople call everyone they’ve met this month. He’s throwing out spiffs that are higher than normal. He’s spot-delivering anything that “might” stick and throwing deals against a wall that for the first three weeks of the month he would turn away. The last day of the month comes and goes and it’s time for “the reckoning”. Maybe he made his number, maybe he didn’t. What he does know is that on the last few days of the new month, he’ll be doing it all over again.

Why did I tell this story? Because we all know that this is exactly what happens in a high percentage of dealerships across the country. Depending on ownership/management, some of the same pressures will always exist. This is the car business and no matter what you do, on those last few days of the month, more is expected.  I don’t have a magic solution to all of these problems but I believe that there are things that you can do – whether you’re a Sales Manager or an Internet Director – to avoid a few of these each and every month.

Almost every dealership does two things: use a call tracking service and buy third party leads. Both of these cost money and, in most cases, dealers might as well be lighting that money on fire. Many Sales Managers and Internet Directors don’t bother listening to their staff’s phone calls or looking at what the Internet Managers are doing with the Internet leads that they’re spending a bunch of money on. At least they don’t until those last few days of the month when, most of the time, it’s too late.

Managers should be listening to phone calls and paying attention to their Internet leads daily. I’m pretty sure that this is not an original idea. I’m also pretty sure that many managers agree and have the best of intentions to do so. However, from my experience, I also know that both the story above and the fact that these two things aren’t getting done are, in many cases, fact.

Let’s assume, for a minute, that Mr. Sales Manager truly doesn’t have the time to do some of these things. There is so much floor traffic and deals lined up to be desked that he literally doesn’t have the time to monitor everything. In these cases, the enlightened dealers will outsource some of this monitoring. The unenlightened ones will turn a blind eye… until those last few days of the month when the days magically turn longer and Tylenols transform into Tic Tacs.

For the enlightened ones that are truly under-staffed, help is available for two of the most time-consuming activities I’ve described: call monitoring and Internet lead monitoring.

The first service I would recommend is Phone Ninjas. Their service is phenomenal in not only listening to your phone calls but providing your staff training on how to handle calls through both in-store training and during each lead they review during the month. I have no idea how much the service costs but my guess is that the extra car deal or two you get every month would probably cover that expense.  You can see and hear and example of a call here. [Coaching Review]

The second service is Task Teacher by DealerKnows. This service will go into your CRM and analyze Internet leads based on a process and send you individual reports on how the Internet Managers handled the leads. The reports include valuable coaching feedback for the salespeople on how they could do better in the future and inform you of not only how well they are doing but could also help you identify deal(s) that could be saved whether they weren’t because they weren’t handled properly or because the customer had issues that were never addressed.

Dealers spend a lot of money to drive phone traffic and receive Internet leads: tens of thousands of dollars a month and, in some cases, more. If you can’t pay attention, at the very least get someone to pay attention for you….

… or you can keep buying triple-shot lattes and Red Bulls at the end  of every month while you start listening to these calls and reading these Internet leads and realize just how many deals you “could” have made had you paid attention.

[Disclaimer: I am not affiliated in any way with Phone Ninjas. In fact, the owner, Jerry Thibeau, won’t even invite me to dinner with the rest of the “cool kids” when those occasions arise. That doesn’t mean his service is bad (hence the recommendation), it just shows that, eventually, I’ll get voted off the island at tribal council. I am, however, affiliated with DealerKnows and while my recommendation could be interpreted as a pitch, it really isn’t intended to be. I recommend this service because I know it intimately and, as far as I know, it’s the only one of its kind.] 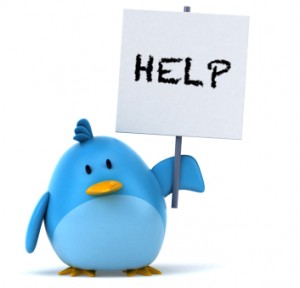 Before you get all huffy (especially the social media vendors that may read this), I want to narrow my definition of “social media” for the purposes of this article down. Social media encompasses a lot of things but I’m specifically talking about Facebook and Twitter management.

There are not many people who would argue that, given the choice and means, any company has the ability to do their own social media better than any vendor. You know your company better than anyone. You have the access and availability to create instant, company-specific content on-site and all the content you need to do it.

That being said, if you find yourself either in a position where you don’t have anyone to do it in house, or you don’t have the time to do it yourself and you are considering outsourcing your social media, consider a few things.

What, exactly, do I mean by that?

In my opinion, every company that exists and works within the automotive space that offers social media services are, in reality, offering content marketing services. The basic idea is that they will set-up and/or manage your social media properties and provide content for those properties on a daily (or less) basis. Yes, chances are that they will respond to comments left (hopefully) and engage with fans when fans engage with you. They may offer to help you grow your fan base and followers – some via methods with which I agree and some using methods which I think are idiotic. Keeping in mind that I’m only talking about Facebook and Twitter management (not reputation, location-based services, etc.) that typically encompass the scope of work.

I’m certainly not trying to imply that there is no value in content marketing. There are lots of benefits to it especially with well run blogs with great, relevant content… but it’s not social media (at least as defined for the purposes of this article).

So, what is social media?

In my opinion, if someone says they will manage your social media properties, these are the types of things they should be doing:

How do I know that there are NO social media companies that do this? Well, I’ve talked to many of them. Heck, it was my JOB to research competitors. I also attend trade shows and pay attention.

The reason they don’t do it is that it is not a scalable business model. Bottom line. I get that and agree that it probably isn’t but that doesn’t mean they’re providing social media services.. they’re providing content marketing. That’s all well and good but let’s keep it real.

Just because doing it right isn’t “scalable”, that doesn’t justify calling your service something that it isn’t. Many dealers don’t “get” social media. Some “kind of” get it. The ones that actually “get it” will agree with everything I’ve just written (or at least I hope they will).

So, remember two things about your social media: First, that you can do it better than any vendor whether you believe that’s true or not and second, that, IF you’re going to outsource this to a company, at the very least know the difference between a company offering you social media and one offering you content marketing.

[Note: If you know of a vendor that does all of the things I described above and/or even more, I’d love to hear who they are.] 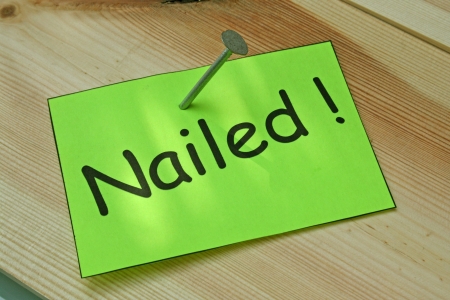 Let me start by saying that I’m a fan of Facebook’s Promoted Post feature in general. If your goal is to increase your Page exposure and reach not only more of your fans but penetrate their networks as well, I’ve found that they accomplish that goal. They are especially useful for smaller pages with a fan count under 1500 where the typical cost to promote a post will be in the $5-$10 range.

In the past, on a particular Page which has 164 fans, the options available for promoting a post were $5 and $10 with an “estimated” reach of usually in the 2,000 range for the $10 option. Considering that a typical Page post will reach an estimated 16% of the Page’s fans (in this case approximately 27 people), this is a considerable difference. This Page typically gets good engagement and has a slightly large reach per post – typically between 40-100 with some posts even reaching into the 700 range without promotion (although this is rare).

Recently, Facebook decided to increase the available options to Pages with a smaller number of fans. I noticed this and decided to try testing it out to see what the results were.

Here were my options: 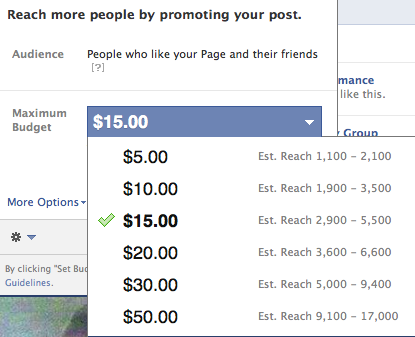 As you can see, the potential reach increased from a maximum of 2,000 I was offered previously to 17,000. I decided to take the plunge and test out the $50 option and let the ad run its course over the 3 days (which, in case you didn’t know, is how long a single post will run in a promotion) so that I could see what the results were.

Here were the results: 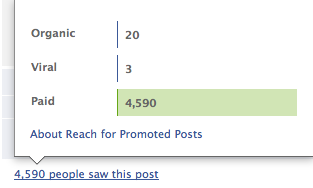 As you can see, this is considerably less than the estimated exposure Facebook promised me in their “estimate” of between 9,100-17,000 for $50. In fact, this should have been the results if I had chosen the $20 option.

I find it completely unacceptable (and false advertising) that Facebook would deliver the post to about 33%-50% of the estimate I was promised for my $50. I have noticed this disparity in the past but since I’m working with some Pages that have a smaller audience and the reach promised was much less, the disparity between the “estimated” reach and the final number has never been that large.

Bottom line is that, while I still think Facebook’s Promoted Post (or Boost Post as they’re now calling it) option is a good value for exposure, I will no longer have any confidence in the “estimated reach” promised.