[UPDATE 5/22/12: According to this article by AllFacebook.com, Facebook has reversed course and decided not to issue paper stock certificates so this whole article just became a fantasy.]

First, a disclaimer: I am not a financial advisor in any way, shape or form. What I AM is an entrepreneur so take this advice from that standpoint. There is never a guarantee of future value but this is why I think it’s a good investment.. if bought in a certain way.

Today, Facebook held its IPO to much media attention, speculation and became the largest IPO ever in the history of IPOs. There is a ton of advice saying that the opening cost is overpriced, to wait, etc. and that its a bad initial investment. I disagree but only from the perspective, and using the method, I describe below. 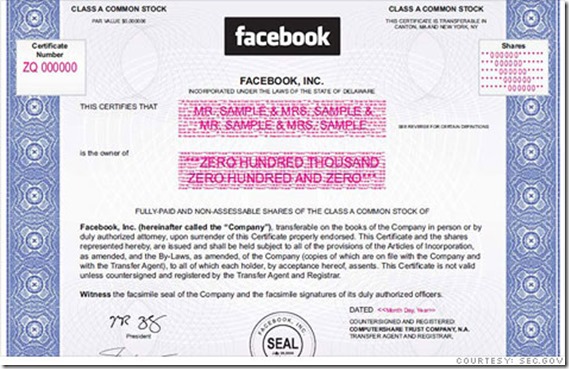 I’ve been selling things on eBay for over 14 years and I’m always on the lookout for things to sell and make a profit so I thought about this and did some research.

When Apple had its IPO in 1982, shares cost $22 each. They also offered the option to buy a physical certificate. Without any consideration for the current market value of that share, the actual certificate itself has a market value of almost $600 on eBay. Say you bought 100 shares and asked for individual certificates. The certificates ALONE would make your initial investment of $25/share ($2500 after adding a few dollars for the certificate) worth $60,000. If you actually retained ownership of the stock itself, without consideration for any stock splits or anything else, the shares themselves would be worth $53,259 (value as of May 18 at 12:00pm PST). You can retain ownership of a stock and sell the actual certificate so your initial investment with physical shares is suddenly ~$113,259. Yes, it took 30 years to make this but it’s still a VERY healthy return on your investment.

People like collectibles and owning a piece of history. If you’re going to buy the stock anyways, pony up the extra couple of bucks a share (Make sure to get individual shares on each certificate rather than multiple shares on one certificate to maximize the potential future sale as people are buying the certificates themselves. There is no difference in value between a certificate that is for 1 share or 100 shares.) and have the extra potential return.

My guess is that a certificate purchased on (or near) the actual IPO date would be worth more to a collector in the future (as in the Apple stock certificate example). I also believe that the initial stock shares will be signed by Mark Zuckerberg based on similar past IPO certificates.

Of course there’s never any guarantee that the certificate will be worth anything in the future and this is certainly a long term investment whether you keep the shares AND the certificates or just the certificates. Whichever you decide to do, there’s more POTENTIAL in having the certificates then in not having them. In addition, due to the high demand for the stock itself, I don’t believe Facebook will be offering paper certificates for very long so you could have a narrow window to take advantage of this.

Most stock certificates won’t sell like this, of course. The examples I use are exceptions but I believe Facebook will fall into this category. If an old AOL floppy disc (that were everywhere “back in the day” and that they mailed to everyone once a week, it seemed) can sell for almost $10,000 on eBay… well, you get my point.

Either way, in my opinion, it’s kind of cool to own a piece of history.