Free Ride for Facebook “Offers” Comes To An End

If you’ve been using Facebook’s “Offers” feature with your business page, the free ride is over. According to the Wall Street Journal, Facebook began charging businesses last week to run new offers. The “Offers” pricing structure is similar to the “Promoted Post” feature, it will vary based on how many “Likes” you have and how much exposure you want, with a $5 minimum charge for smaller business pages. This move is certainly in line with Facebook’s need to further monetize its services to appease stockholders. While “Offers” may now cost money, the “Deals” feature is still free for businesses to use… for now.

Apple set new sales records last week, with the much-anticipated release of the iPhone 5. The company sold 5 million phones in just 3 days with 2 million phones sold within the first 24 hours, according to many sources including the International Business Times. Pre-orders for the first batch of iPhone 5s sold out inhours from Apple and all other vendors, the day pre-orders began–and that was just in the U.S. Today, the iPhone 5 launches in 22 countries with inventory already in short supply. Clearly, mobileusers–and smartphone owners in particular– have arrived in force. They are using their phones to read and write customer reviews, search for stores and inventory, and become more connected than ever on a more sophisticated

Last week, California became the third state to pass laws that restrict employers and post-secondary schools from requiring access to social media accounts. California joins Maryland and Delaware in recognizing that social media accounts are private by nature and that forcing an employee or student to grant access is an invasion of that privacy. As quoted in an article from Bloomberg, California Governor, Jerry Brown, says that California is “pioneering the social media revolution and these laws will protect all Californians from unwarranted invasions of their personal social media accounts.” This is a trend that will likely continue to expand as social media awareness and use increases.

According to this article in the Atlantic, “Facebook alone refers more than 48% of small business web traffic.” If you include Twitter, which is responsible for 4% of web traffic, these two social media sites account for over ½ of all small business web traffic. It is becoming more important for small businesses to have and cultivate Facebook and Twitter presences. Just like traditional advertising, you want to be visible where your customers are but, unlike a billboard or newspaper ad, with social media you have the opportunity to engage and communicate not only with your customers but with potential customers as well. With almost 1 in 7 people in the world owning Facebook accounts, learning how to properly use it and other social networks to market your business is no longer optional.

As Hurricane Sandy bears down on the East Coast today, evidence that social media as a common news source and method of instant communication is becoming more prevalent. According to Computerworld, everyone from private individuals, airlines, and Federal, State and local governments and emergency services are turning to social media to relay information. Google has setup an interactive hurricane map, Facebook itself set up a Hurricane Sandy community page, FEMA is using social media to update citizens, airlines are using it to update people on flights with over 10,000 flights cancelled today across the country and the American Red Cross has integrated social media into its “Hurricane” app which allows people to “update friends and family by simultaneously sending out messages on Facebook, Twitter, via text, and e-mail.” The hashtag #Sandy is the top trending topic in all areas affected by the storm. These actions validate that social media has evolved significantly from simply a way to let your friends know what movie you’re watching to a legitimate means of delivering news and information instantaneously to a lot of people all at once in a centralized location.

Every time our country experiences a natural disaster, many businesses rally to assist those affected. These shows of empathy and the willingness to help their fellow human being are great and can show true character from the company.

Recently, due to the devastation caused by Hurricane Sandy, automotive manufacturers joined these relief efforts.

I don’t know about you but if I were affected by Hurricane Sandy with results ranging from flooded houses to no electricity and fuel rationing, the last thing I’m probably thinking about is buying a new car. Sure, maybe my car is underwater and totaled and I will need one eventually but is it truly philanthropic to offer what amounts to ’employee pricing’ to affected consumers? Nissan is already blaming slow sales on Sandy. Now, it appears as if they are attempting to stimulate sales by capitalizing on it.

“Employee-pricing” just doesn’t seems like philanthropy to me, personally. I know that, in many cases, a consumer can negotiate a price below what an employee would have to pay. Most auto manufacturers and/or car dealers have offered employee pricing to their consumers at some point in time as simply a normal sales promotion. What turns this oft-used sales promotion into an act of charity all of a sudden? Nothing.

Both companies have offered to assist customers of their respective lending arms with payment extensions and flexibility, which is great, but only one of these “efforts” seem like a true charitable gesture…

..and it’s not the one offering a discount on a new car. 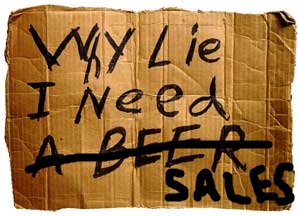