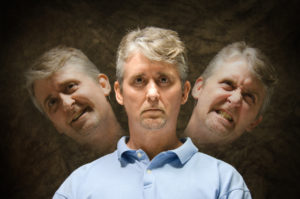 For those unfamiliar with the story of Sybil Dorsett, she was a woman with dissociative identity disorder who had as many as 16 different personalities which would dominate and reveal themselves at different times. Made famous first by the non-fiction book, Sybil, then the 1976 movie starring Sally Field, Sybil was one of the most famously documented cases of this disorder ever documented. While victims of this disorder typically don’t have this extreme of a case, there is one group of people who have made a parallel leap into what is very similar: just about everyone on the (digital) planet.

How does the story of Sybil relate to “everyone on the (digital) planet?” An excellent article on YourStory.com shares a few examples which I’ve expanded on.

While technology has quickly evolved which allows marketers to collect data in which a consumer’s journey towards any purchase can be tracked to include key influencing factors like marketing messages, websites, emails, banner ads and offline messages, today’s consumers have so many platforms, channels and devices in which to make that journey. The Sybil analogy comes into play because every consumer has a preference on which activities they perform not only on which devices but on which platforms.

For example, Melissa might choose a desktop to shop for cars rather than a mobile device. She may use Facebook for personal interactions and business or entertainment recommendations while using Twitter for political commentary or activity-based messages and she may prefer to do those on a mobile device. Compound these with the fact that Melissa may not be doing some of these activities for herself but on behalf of another and you have a bunch of different digital personalities (footprints) happening. The problem is that there is no context.

What if Melissa is helping her brother identify good cars for him, but really only uses her desktop to check e-mails and write about the country music bands and festivals she likes attending? Perhaps all of the dancing tweets, retweets and information sharing are actually because her daughter is a dance aficionado? If she’s talking about a movie her husband enjoyed on Facebook, what digital indicator is she leaving?

There exists a lot of data in the universe that marketers can tap to deliver more personalized, relevant and actionable messages which, in the best result, produce more sales. But consumers are no longer that transparent. Delivering an ad to Melissa on her desktop computer about a car while she is trying to blog about Garth Brooks is probably a waste of money – especially considering she was never interested in buying a car but only gathering information for her brother. In the same way, delivering ads on Twitter to Melissa about movies or on Facebook about dancing may be.

Even though the data says they are relevant, they may not be because the data cannot tell you context or intent nor identify preferences on platform usage.

The data is out there and the touchpoints can tell you the journey that was taken to a sale or conversion. What it cannot necessarily tell you (unless you dig deep – and are a data scientist) are both what the motivations behind those activities were, whether they were of self-interest or not and whether there are more effective platforms on which to deliver your message than others.

Marketing is only going to get more complicated and it’s no longer a matter of whether the data exists (there is a ton), but also having the knowledge to know which data is relevant, which platform its relevant on, how to best deliver that message in a personalized way, get a conversion and, ultimately, a sale.

Data is no longer about simply having it but rather about trying to decipher which personality a given individual is demonstrating at any given time.