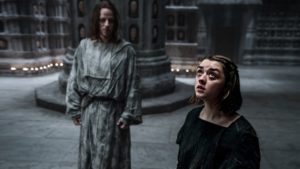 In the uber-popular television series (and books… which are way better), The Game of Thrones, there exists Arya Stark. She develops from a high-born girl into a trained assassin whose talent is to mimic anyone – a talent known as “the faceless man.” It doesn’t matter who the person is, what they want or who likes (or doesn’t) like them… only that she can imitate them so well that nobody, not even these people’s closest friends, family or allies, can tell the difference. And therein lies the problem – and connection – with the future of the automotive industry.

Times are changing. Dealers have hybrid, electric and autonomous vehicles looming on the horizon. Ride sharing is gaining in popularity. OEMs are implementing shared leases while backing Uber, Lyft and others. But those are the least of their problems.

What’s in the future for dealerships? If the OEMs had it their way, dealerships will be homogenized into something akin to Wal-Mart. When you go to Wal-Mart, do you care which one you go to? No! What about a grocery store? No! You go because it’s convenient and you like the chain, not necessarily the specific store.

OEMs aren’t investing millions of dollars to conform all of their franchises to look the same because they want any particular dealership to be more appealing. These are all ruses in disguise of help. They’re investing because they don’t care WHERE the customer buys their (insert make here), only that they buy theirs vs. the competitors… just like Wal-Mart, Target or any other retail store. Do you think Apple cares where you buy the latest iPhone? No, they don’t. They only care that you buy it… just like your OEM.

You may think that the OEM is on your side but what do they grind you about every month? Especially on the last day? RDRs. How many times a day does your DOM call you on the last day of the month asking how many new and certified (insert make here) you have sold. They could care less if you sold 60,000 non-certified pre-owned other-make vehicles for a gazillion dollars in profit. They only care about how many (insert make here) you sold.

Many dealers have been in their communities for a long time. Many are pillars of those communities assisting in local events, charities and other functions. If a dealership lets themselves become homogenized and become the next Wal-Mart, nobody will care about them just like they don’t care which Wal-Mart they buy their groceries from.

If Wal-Mart sponsored your local car show, community event or charity function, would that make anybody in your community (or you) loyal to a SPECIFIC Wal-Mart? No. They may like Wal-Mart more, but not any given one. Do you want to be the Wal-Mart location that nobody cares about unless you’re convenient? I doubt it.

When your OEM tells you to take down the American flag (yes, this has happened), remove the commemorative pictures or decorations because it doesn’t conform to their “vision” (this has, too), make YOUR dealership look like all of the other franchises (Yup) or ANYTHING ELSE that detracts from your dealership’s personality or uniqueness. You tell them to GET LOST.

Be who you are. Remain that pillar in your community. Retain your business personality. Take care of your customers and don’t become the next (insert make) Wal-Mart.

That’s the only way that you’ll secure customer retention, loyalty and, more importantly, your dealership’s future.