You control nothing. I don’t know the origin of the phrase “reputation management” but it’s erroneous. Just as social media networks should be built organically, so should your online reputation. Treat people right; you’ll reap the benefits of some of them sharing that fact online. If you treat them wrong, however, you’re screwed.

As consumers get more active online, they are starting to realize the power they have over businesses with their social media voice and through online review forums. Businesses recognized the importance of online reviews years ago. Thus, the birth of review building processes and businesses.

Many businesses have typically employed a reactionary stance towards reviews. They weren’t really soliciting reviews. If they got some, great. When a bad one came around…mayyybbbeee… they’d get involved and try to solve the problem. Many wouldn’t even notice. As everyone started to recognize its importance – businesses, consumers, vendors, search engines… everyone…- one of a few things happened:

1. They realized that they needed to treat their customers right and aspired to do so. They started paying attention to the review sites and, when an issue arose, they did their best to solve the problem for the consumer.

2. They continued along the path of “ignorance is bliss”. They neither paid attention or did anything.

3. They made the decision to hire a “janitor” (or act like one) to clean up after their mess.

In February 2011, I wrote an article about one of these “janitors”, Review Boost. In January 2012, I wrote another article about companies “buying reviews”. These aren’t new practices nor are any of the companies involved the only companies that offer these services. However, as you could read in those articles if you choose, it didn’t end well for those companies.

Do you really think you can “manage” your reputation? Seriously?

Despite the fact that there is no way for you to control what is being said about you online, there are only a few ways in which a business who doesn’t treat their customers right can continue to operate the way they are now without getting killed via social media and/or online reviews.

1. They can hire these companies to “bury” the bad reviews by adding a ton of good (and, in some cases, fake) reviews.

3. They can try and bribe the consumer(s) to remove a review. 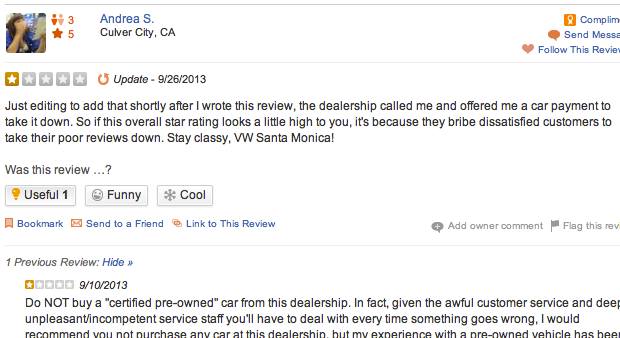 [Hat tip to Dave Erickson for the image.]

Yeah, how’s that “strategy” working for you?

Consumers are not only finding screaming and yelling via social media more effective, they have actually started to pay these networks to advertise those complaints!

I could show countless examples of these types of events. The fact is that these tactics don’t work. You aren’t controlling anything. You may be pouring cat litter over the oil you spilled in the driveway but unless you fix the leaky oil can, you’ll be doing it forever.

Consumers are waking up more and more everyday to the real power they wield… their voice. Consumers trust their friends and family, their social networks, then reviews left by other consumers. You notice I didn’t include “what you say about your business” in that list of who they trust, right? That’s because they don’t trust you. Of course you’re going to say that your business is the best thing since sliced bread, you have the best service in the industry, lowest prices… blah… blah… blah…

So, why don’t you stop trying to “manage” your reputation and start building one?

It may cost you money and you may not agree with the customer but do the right thing. Every time. No exceptions. No matter how badly you don’t want to. Just do it.

…or you can let the customer manage your reputation. That’s who’s doing it already.