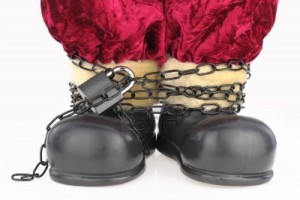 Coming from a retail background, I can attest that working in sales at a dealership is hyper-competitive. The whole ‘hero to zero’ mentality is meant to motivate salespeople and not let them mentally back off or take the next month easy because they were top salesperson and/or got a fat paycheck. Now, I know that there are some dealerships where this environment doesn’t exist now as it’s been a little while since I actually sold cars but I do know that this environment exists in many stores to this date.

What made me think of this was when a friend was thinking of planning a ‘Secret Santa’ and ‘cookie exchange’ for the holidays. I had no idea what she was talking about which boggled her mind. You see, these things just didn’t exist in retail. I never wanted to give presents to other salespeople nor did I ever receive any. Now, I’m a pretty giving person. I like giving people gifts and making their days a little brighter, it just never happened. Yes, there were times when I was given Christmas bonuses by employers and, while I appreciate money, it doesn’t ‘feel’ quite the same as being given a gift that took some thought regardless of how much the gift cost.

I remember, in my early days in retail when I was a green pea, literally ducking staplers that a sales manager was throwing at me. Public verbal lashings, which included many curse words, weren’t uncommon. Finding innovative ways to take other salespeople ‘off-the-market’ was encouraged and bragged about. Skating another salesperson was commonplace and arguments over customers and deals were daily occurrences.

Learning that these holiday activities not only existed but were fairly common in workplaces was foreign and it made me reflect on just how much I missed out on in my life. We all talk about the high turn-over of salespeople in dealerships and try to find ways to increase employee retention but I don’t think I’ve ever read, or heard, about a dealership cultivating and encouraging an environment like this. Sure, I’ve heard the whole ‘work as a team’ speech many times but, ultimately, that sentiment lasts only until the next deal dispute happens.

The spirit of the holidays, and a conversation with a friend, saddened me. I sincerely hope that my sharing sparks thought in those still out there in the retail sales environment missing this just as I did.

For many salespeople in retail environments, it’s not beginning to look a lot like Christmas.

Instagram began launching web profiles on Monday, according to Mashable. Facebook has wasted no time in their attempt to knock some of the steam out of Pinterest. In our August 10 “Stat of the Week”, we shared how Pinterest is the 4th largest driver of retail web traffic and drives four times as much as Facebook. It appears as if Facebook is fighting back by leveraging their recent purchase of Instagram to gain some ground in the search arena. The fact that Instagram will have a web presence and is owned by Facebook certainly puts them on the map and in contention immediately. As mentioned in the Mashable article, Facebook and Instagram integration is sure to deepen which doesn’t bode well for Pinterest. It remains to be seen whether Instagram will have the SEO value that Pinterest currently does, but with 100 million registered users versus Pinterest’s 20 million (per Forbes, July 2012) Instagram certainly has a built in audience that position it to do so.