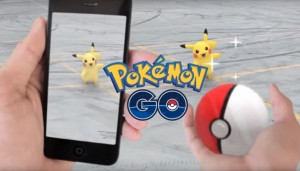 So it’s been a long time since I wrote a blog (for myself, that is) but after attending Jim Ziegler’s Internet Battle Plan and watching a kid yell “I found a Pokémon!” then promptly walking into a wall then watching adult auto industry attendees, vendors and speakers choose to go Pokémon hunting rather than network with industry colleagues and dealers, it got me thinking. First, yes, I downloaded the app just to see what all of the fuss was about. My Pokémon Go experience lasted all of about 15 minutes. I’ve seen people argue that Pokémon Go is silly and a waste of time while also seeing others relay the benefits of the game including physical exercise, exploring one’s neighborhood and connecting with new people with (at least one) similar interest.

I probably wouldn’t have been even interested in exploring the app at all but for the fact that a client created a clever ad that tied into their business message and we started exploring ways in which we could exploit this trendy craze. Who knows how long this game’s popularity will last but, for now, it’s the hottest thing around. Playing to trending things is nothing new and if you can leverage it in a way that supports your message or drives business, I’m all for it (sans tragedies, politics and the other taboo topics).

In my research, I found that there are things called “lures” in the game. You get these by catching Pokémon and doing various things BUT you can also purchase them for $1 each through the app. These “lures” are like catnip to Pokémon and the area in which the lure is set shows up within the game to other players. Of course, seeing as the goal of the game is catching Pokémon, it’s easy to understand why dropping a lure (which lasts 30 minutes) would attract nearby players. For $1 per half-hour, a dealership could pretty much leverage lures to the tune of $20 per day (given a 10-hour business day) and get a fair share of explorers. [EDIT: A fellow automotive colleague and self-professed Pokémon Go addict informed me that lures can only be used at already established Pokéstops. I do know that there are businesses that have been designated as such so this strategy would only work if your dealership were already a Pokéstop apparently. The overall intent of the article is discuss the marketing opportunity soon to be available as described later in this article.]

There are also things called Pokéstops and gyms which naturally attract players but Niantic (the game’s creator) decides where these Pokéstops are located. Of course, the concentration of Pokémon or the ability to train them (level them up) make these popular places for players. While actual user numbers haven’t been released, I’ve seen articles that report that daily use of Pokémon Go is extremely close to surpassing the daily use of Twitter. That is huge.

Well, it looks like (unsurprisingly) that Pokémon Go is going to make it very easy for dealerships (or any business) to leverage their game to drive foot traffic to their location. Of course, a company that’s pulling in $1,000,000 (yes million) per day just through in-app purchases decided to commercialize by extending business sponsorship opportunities. It’s reportedly always been in their plans but, due to the super-fast popularity (including a 50% increase in Nintendo share price), those plans have been expedited. Soon, businesses (read: dealerships) will be able to pay to be a “sponsored location” which would (hypothetically) make the business an uber-popular place to visit for Pokémon Go players.

Seeing as the game’s developer, Niantic, is a spin-off owned by Google and the game engine itself uses Google Maps for the GPS function within the game (i.e. finding Pokémon) it’s no surprise that the revenue trigger (i.e. what needs to happen for revenue to be produced) has been altered from the traditional cost-per-click to one of cost-per-VISIT. Yup, you read that right.

Now, knowing that you’d be charged based on how many Pokémon Go players show up at your dealership, the question now becomes… Is that something you’d want to pay for? Are these people worth having around, running around your lot searching for these cartoon characters while staring at computer screens?

I was told of at least one dealer group that’s already running a promotion leveraging Pokémon Go by running a contest in which players explore the lot and, when they find a Pokémon, screenshotting the Pokémon at the dealership then sharing it to social media including Instagram and naming the dealership. This is a new promotion (just like the game) so I don’t know how it’ll work out for them but I wish them well.

In my opinion, whether a dealership should become a “sponsored location” will depend on several things – the dealership’s demographic and whether they want people running around looking for Pokémon rather than buying a car (I mean, even people really there to buy a car are staring at their phone showrooming you so you probably wouldn’t know the difference between the two unless one of them is 10 years old). The opposite side of that argument is that a busy lot snowballs and attracts other buyers. I mean, we do use inflatable gorillas and wavy tube men, right? Now you can have Pokémon hunters attracting others and forgo the gorilla. (I wonder if the gorillas and wavy tube men qualify for unemployment or food stamps.)

All of that being said, we don’t yet know what the “cost-per-visit” will be but my guess is that it will be determined just like any other Google advertising – based on bids. Get into an auto mall and that might get expensive. It could offer the kids something to do while the parents are shopping or you could see the parents hunting Pokémon WITH their kids. If you subscribe to the “happy, sense of community, getting out and meeting people” philosophy, it could be a way to make a name for yourself (or become a more popular destination) within your community. Of course, being a sponsored location probably won’t end when you lock the doors. There could easily be people jumping your blocker cars to explore your closed dealership just to hunt Pokémon. I may know of someone that might possibly have broken into a miniature golf course just to catch a Pokémon… but that’s just a story I was told so I totally have plausible deniability… besides I would plead the fifth anyways.

So what do you think? I’d love to hear from dealers and/or vendors on their thoughts as to whether this sponsored location option about to come around through Niantic, Nintendo, and Google via Pokémon Go is one that a dealership should consider.

Do I believe that it will make the dealership a popular place to visit? Yes. Do I think that it would increase foot traffic? Yes.

The real question is whether it is foot traffic that a dealership would want.